WELCOME TO ON THE GO GARAGE LLC

As a responsible automotive repair company, We always strive to provide reliable, cost-effective services to our customers.

DONT GET STUCK ON THE SIDE OF THE ROAD

Don’t get stuck paying a high dollar hourly rate from the other garages in town. You do not need to put off that needed repair any longer with our low-cost quality rates. Contact us today to see what we can do for you!

WE DO IT ALL

We do it all from small brake repairs to full engine or transmission swaps. We can lift your Truck or Jeep. We can lower your car as well. Contact us today so we can help you with your next project.

On The Go Garage started off by going to friends and families houses and repairing their cars at a fair price compared to the big named auto repair shops. Some shops in the area have an 85% markup on parts and huge labor fees per hour. (We do not) Typically we save customers hundreds of dollars per job because of retail prices without markups and low labor cost. We fixed brakes for our customers, Sensors, Struts, Engines, Wheel Bearings, etc. We were the garage that comes to you and we kept cost low because of almost no overhead. (And we still do)
As we continued to help everyone they started to tell their family and friends and we kept growing and growing. Faster than we thought we would or planned for. Now because of our awesome customers, we secured a 5,000 square foot shop to service our customers and a growing business! We continue to keep the overhead cost low because of the contract we worked hard on and secured for the long term. We get to pass those savings onto our customers every day!

We personally have always loved tinkering and adding performance parts to our personal cars, customizing them, and lifting trucks. So repairing vehicles comes naturally. We are different from the rest because we have a flexible schedule. If you need work done on the weekend or late afternoon we will work to get you in. Would you like your car fixed while you are at work? We will pick up the car repair it and bring it back before you get done with your shift. Pick up and drop off if needed etc. We will always be as flexible as possible for our customers to provide them with the best experience possible. As a responsible automotive repair company, We always strive to provide reliable, cost-effective services to our customers. We can’t thank our customers enough because we are only here and growing because of you! No one likes a breakdown or spending money on things you didn’t plan for but when an issue happens or you need maintenance. Send us an MSG and let us provide you with great service at savings.
On The Go Garage LLC is a leading automotive mechanic service provider located in North East Pennsylvania. Contact us at 570-788-4070 today to take advantage of our first-class quality automotive mobile repair service!

Our staff is small but mighty. We work hard to get your car back on the road as soon as possible. We don’t let your car sit idle waiting to be repaired in our lot like others. 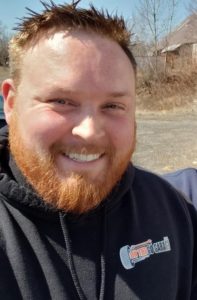 Champion Napolitano always had dreams of owning his own business. As a youngster, he would go with his great grandmother to the flea market to help her sell her doyleys and other crafts she would make. He also would bring his unused toys and sell them with her crafts. In sixth grade, he lived next to a candy store in Freeland PA and would frequent the store and purchase candy and other items. He would make little care packages out of the items and sell them at school to his classmates.

As a teenager, he formed a passion for cars because of his grandfather. He would help him rebuild engines, clean the cars, change brakes, and tune them in a little 1 bay house garage in Shickshinny PA. Before he could even drive he got his first car a 1977 Buick Skylark. It needed work and he would work on it at all hours and go to the junkyard for parts with his grandpa and fix it up over about a two year period. He even got in trouble a bit from grandma for bringing a transmission into the house bedroom and other items that were better suited in a garage but he didn’t have one of his own. He finally could drive and drove that beloved Skylark to school and work. He built it a little too fast for a youngster and ended up wrecking it but never wrecked his passion for cars. During this time he worked at call centers and quickly became a directors assistant at the age of 17 and learned computers at that job. He then landed a job at a big internet company and learned a lot about how the internet worked, email, and websites. He also worked at AutoZone as a parts pro and built up his customer skills even more and car knowledge. He also worked there for the parts discounts for his rides. =P

The reason I say all this is because with his life experiences he started to work on friends cars on the side to help them save money. This took off and it became what it is today which is On The Go Garage LLC. His experiences in sales at a young age, various customer service skills jobs and knowledge of the internet allowed him to build the business website. It helped him market the business on the internet. It helped him treat customers fairly and strives to make them happy customers every day. All of this knowledge allowed him to build the business without a lot of overhead to outside companies. This, in turn, helps the customers save BIG. He is always growing and building and couldn’t do it without his customers that he loves so much!

We will always make it our mission to treat each customer like family. We want you to drive a safe and reliable car at a fair price.

A car today has many advanced systems that control your car. We have top of the line diagnostic tools and first-hand knowledge to fix your car correctly the first time.

We do our best to get your car done on time so you can get back on the road. We won’t let your car sit in the parking lot for weeks as other garages do. When we schedule you in and tell you your car should be ready at a certain time it 99%will be. If something unforeseen happens we will update you as soon as possible if any delays happen. We will never leave you in the dark about your car.

We sell all the parts we put on your vehicle at retail cost. No huge markups like the other guys!

We know you might not know a lot about cars but we will take the time to explain the issues with the vehicle and take care of you and your ride.

We Work Around You

We have set hours but if you need us to stay a little longer or show up a little earlier, we will do our best to accommodate you. Can’t get your car to us, we can pick it up.

Let us get your ride back on the road!

Give us a call to schedule you in

Here’s what our happy customers had to say about our services:

So friendly and down to earth. Didn’t try to bamboozle me and even showed me everything that needed to be fixed. Got me in within 2 days of my first visit to get repairs started. So incredibly thankful!

I’m so glad to have a mechanic that does reliable work, charges reasonable prices and that I can trust to do the job well.

Wish I could add more stars! On The Go Garage saves the day… Unbelievably fast service by one of the nicest gentlemen I have ever met! Champion is a champion!!!

Great auto shop with friendly, honest folks who run it. Once you find it, you’ll keep going back.

Got some aftermarket parts for my 2017 Fusion Sport and needed someone to install for me as I didn’t have the space to do it myself. Champ and Joe were amazing at getting everything done. 10/10 would recommend them to anyone.